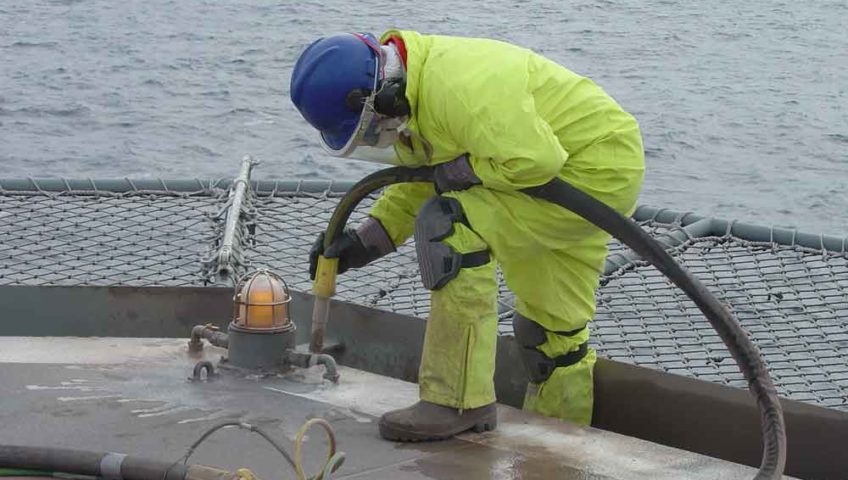 Vapour blasting is a term that is commonly used to describe the process of wet abrasive blasting (although you might also see it described as liquid honing, vapour honing, dustless blasting, wet blasting or slurry blasting). As well as there being several interchangeable terms used to describe the process, in some people’s minds there is likewise no distinction between vapour blasting, sandblasting and UHP cleaning.

However, although each of these processes can be used for removing old layers of paint, dirt, contaminants, corrosion and rust from a range of different materials and substrates, there are some very important differences between the capabilities of vapour blasting, sandblasting and UHP.

Ultimately, the three processes are not identical, and while they can sometimes be used in the same or similar applications, the operation, functions and results can be quite different.

How does vapour blasting work?

In vapour blasting, blast media is propelled at a surface at high speed using a combination of water and compressed air. As it is encased in water, this means that the blast media does not become embedded in the substrate and is able to be flushed away, producing a cleaner, untarnished finish.

This also makes it a more gentle process and means that vapour blasting can be used on a wider range of surfaces than dry blasting methods, including softer substrates such as wood, fibreglass, plastic, rubber and composites.

With vapour blasting, you can also profile the surface to the exact configuration needed for the type of paint or protective coating that is to be applied after cleaning. This can be done with more precision than is generally the case with dry blasting, and a more even, feathered effect can be achieved.

Wet blasting also reduces the risk of flash rusting developing on metal and steel surfaces that are being cleaned, as soluble salts, which are the primary cause of rusting, are washed away by the water and not left behind on the surface, as is often the case with dry blasting methods.

There is also less dust and waste produced by vapour blasting than conventional sandblasting, as the blast media is cushioned by the water and so does not break up to the same degree. In turn, this also means that less blast media is required and so overall costs, including those for encapsulation and waste disposal, are reduced. Vapour blasting will also generally require a lower blasting pressure, meaning that less water is used than in UHP.

Ultimately, vapour blasting is widely considered to be more environmentally friendly than other dry blasting or UHP cleaning methods.

How does sandblasting work?

Sandblasting is also referred to as abrasive blasting or dry blasting, with the main difference between this process and vapour blasting being that water isn’t used. Instead, the blast media is propelled using compressed air only.

Although a variety of both hard and soft blast media can be used in sandblasting, it is ultimately less versatile than vapour blasting, as it tends to be a harsher process and so can’t be used for cleaning and profiling the same range and variety of substrates.

It also tends to be the case that a larger quantity of blast media is used in sandblasting, while more dust and waste also tend to be produced. This is because the blast media is not cushioned by water in the way it is in vapour blasting, meaning it fractures and breaks up into small, airborne particles. The result is that encapsulation generally needs to be put in place, particularly when working in urban or built up areas, which can add to costs and also has implications for the environment.

Like vapour blasting and sandblasting, UHP can be used to remove dirt, paint, contamination and old coatings from a range of different surfaces, including metal, steel, aluminium, brick, concrete and bitumen. It is also similar to vapour blasting in that water is propelled at high pressure onto a surface to blast away contaminants, and as a result little or no dust is produced.

However, it is the use of blast media within the pressurised water stream that differentiates vapour blasting from UHP hydro blasting. The media blasts away coatings and corrosion hydrostatically, with the water jacket surrounding the media preventing it from becoming embedded in the substrate.

Vapour blasting is also more effective in applications where some of the areas that need to be cleaned are difficult to reach, as is often the case with machinery, boats, marine structures, etc.,as the blast media will ricochet into hard to reach places more effectively than water alone.

Significantly less water is used in vapour blasting than is required for hydrojetting, as the water is used for delivering the blast media rather than being the actual media itself. This also makes it a more environmentally friendly and cost-effective process than UHP water blasting.

Australian Enviroblast specialises in mobile vapour blasting services across Adelaide and regional South Australia. Call Mark Chiappin on 0458 455 668 or email us to arrange a free, on-site demonstration to learn more.